Waco used to be just Waco–a stop on I-35 between the big cities. A town with its own personality and not a lot of ambition to change. That’s the impression I got, anyway. But with recent attention in the media, people are getting defensive about what Waco is and what it’s like to live here. The “cooler” Waco becomes, the more worried we become about being cool.

It’s not uncommon to hear people say things like, “Waco is the new Austin,” or “in ten years, Waco could be as cool as Austin.” It makes sense that we Wacoans would try to model ourselves off our neighbors in the hipster capital a little to the south. We’re a small town in the heart of Texas with lots of cheap real estate — we’re just now getting our first few food trucks and trailers, our city farmers’ market is only a few years old, and with Baylor’s success in athletics, the town is getting a lot of press. Young college students bring in energy, and artists are beginning to see potential in the abandoned industrial buildings that have stood empty for so long. 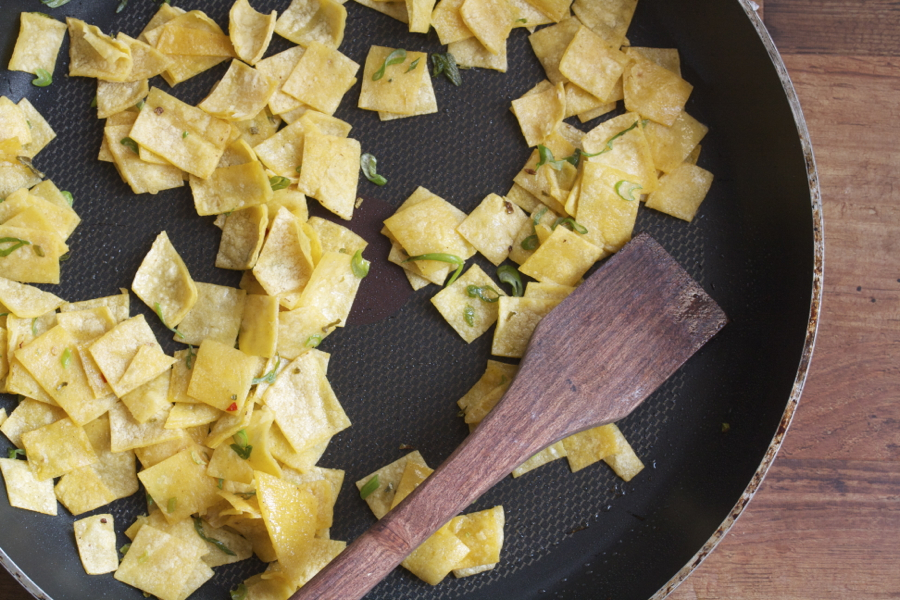 To top it off, Waco hasn’t been “discovered” yet in the way other Texan cities have been. Twenty-somethings from Seattle and Portland and Nashville haven’t poured in with their beards and their ankle pants. Bicycles haven’t taken over the streets. The low-income residents haven’t been pushed out of their neighborhoods to make room for organic cosmetic stores and specialty dog shops. There’s a feeling in the air of possibility and potential, and it’s a free-for-all right now as to who shapes Waco’s future, who builds what on crumbling side streets, which houses are restored and which ones demolished to make room for cement apartment complexes.

I spent this past weekend in Austin. The town has changed at lightning speed in the last couple decades, going from a quirky hub of artistic misfits with Texan roots to a maze of vintage shops, bike lanes, and taco trucks. With all the out-of-towners, there’s a growing question about what is authentically “Austin.” What grew up out of the town’s history of weirdness, and what is just big business coming in and taking advantage of the craze for international food on wheels?

I can see that the same thing could happen here — that if we don’t step up and decide what our town will be, others could. Maybe that’s why I decided to make something for the blog that is so quintessentially Texan for me — migas.

Migas are a Tex-Mex goulash of eggs and tortilla pieces, traditionally served at breakfast, but welcome any time. I don’t know where the dish originated, and I’m sure if I claimed to, someone would argue with me. I do know that I grew up eating migas voraciously, my high school boyfriend’s mom tossing together manteca, papas, and tortillas in a giant skillet, serving them up on cracked ceramic plates with hot sauce on the side.

Like many comfort foods, migas is just a way to use up rejected ingredients — you really need stale tortillas to make this happen. If you don’t eat a lot of corn tortillas, you might not know that after a few days, even if the tortillas are edible, they don’t like being rolled up around tacos and will split if you try. Luckily, that makes them perfect for migas, so that they crisp up and go a little chewy in the skillet. 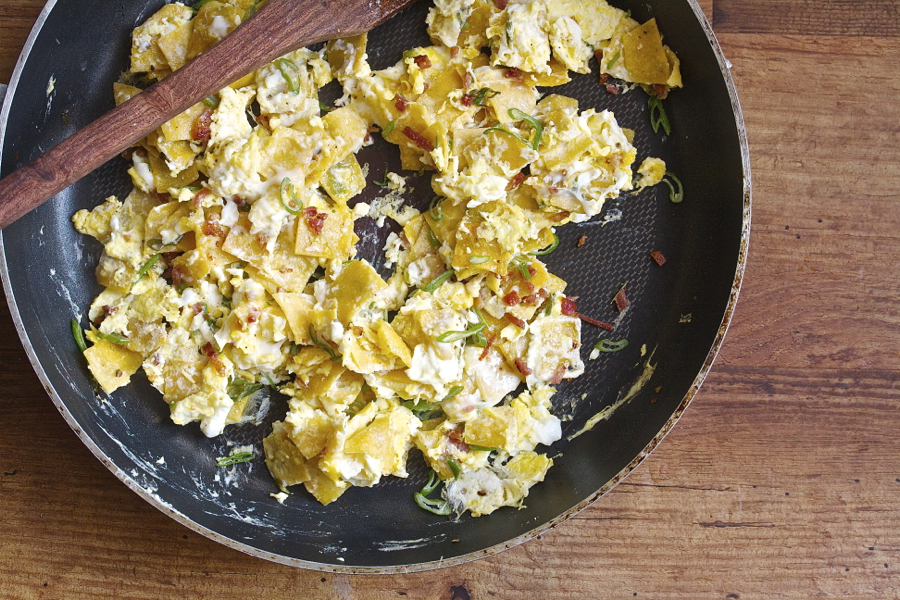 In fact, all you really need for migas are stale tortillas and eggs. Everything else is negligible in my books. Throw in beans, jalapenos, potatoes, cheese, and bacon. Or don’t. Whatever you do, eat migas hot and fast, and don’t restrict yourself to having them at breakfast time.

It’s these things that are so true about a place that I hope don’t get lost. The funky barbacoa that gets smeared into burritos, the fried catfish from the fried chicken joint, the chili with no beans, the greasy half pound cheeseburgers from the place where I choose not to wear my good coat because it will take on that distinct grease smell, the guy who makes fried rice with sausage franks in it. Fancy new taco joints sound cool, but I hope that as Waco becomes whatever it is becoming, we don’t lose the little pieces of culture that make us us.

1. In a skillet, crisp bacon over medium heat. Drain over paper towels, reserving 2 Tablespoons of grease in the pan.

3. Meanwhile, slice tortillas into 1-inch squares. Add to the pan in an even layer and let sit for about 1 minute, so that they develop crusty edges. Stir, and let crisp again, scraping up the bottom with a metal spatula or wooden spoon, if necessary.

4. Chop bacon into small pieces. Add back to the skillet.

5. If your pan is dried out, add a tablespoon of butter or cooking oil. Raise heat to medium-high. Make 4 wells in the tortillas. Crack eggs into the wells. As a skin forms underneath each egg, scramble the eggs in the skillet with a wooden spoon. Stir eggs in so that they coat and stick to the tortillas. Remove from heat before eggs are full cooked. Keep stirring as they finish cooking off the heat.

6. To serve, scoop migas onto two plates, and top with cheese, sour cream, and extra scallions or chopped cilantro. If desired, serve with sliced avocados, pickled jalapenos, and Tabasco sauce.