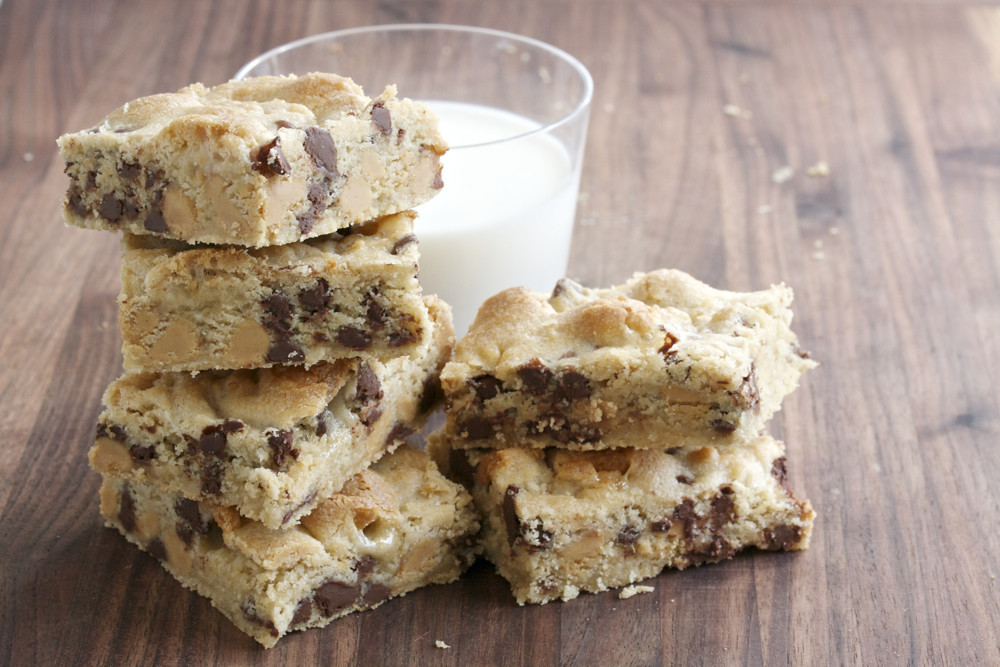 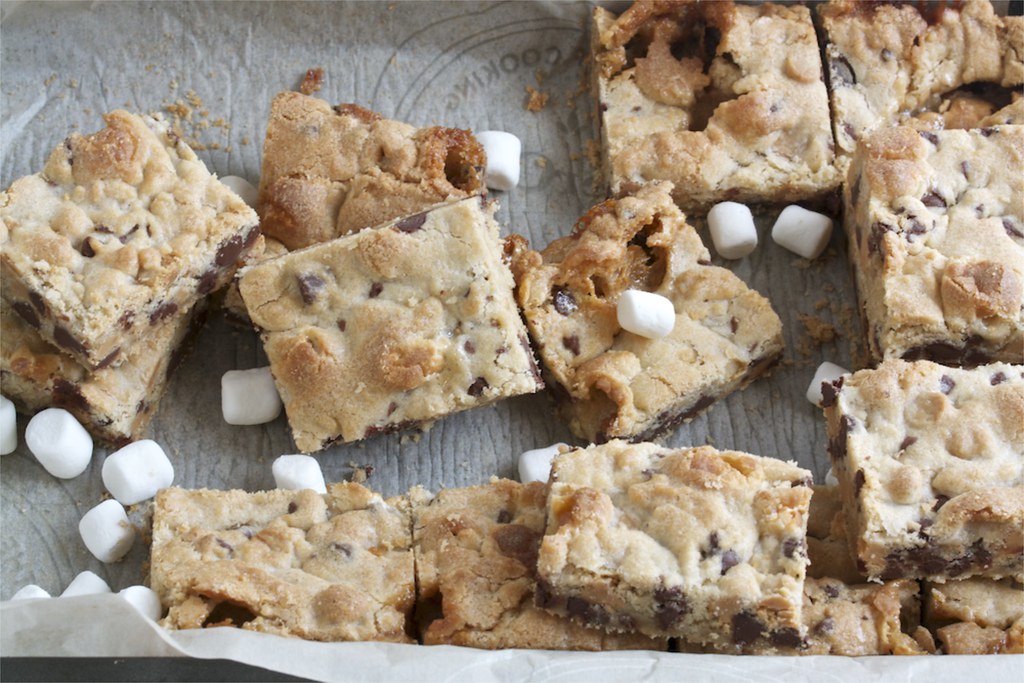 Sometimes when I’m baking, it’s not till I’m pulling something out of the oven that I think, “I’ve gone too far.” When cookies need to be spaced four inches apart because I insisted on using ⅓-cup size dough balls, for example–that might be taking it too far. Or when I open the door and the dim oven light reveals this marshmallowy wonder.

I was talking to a friend recently and I off-handedly mentioned s’mores. He turned to me and said, “Oh yeah, s’mores. What are those like?”

I made inarticulate gestures and flabbergasted grunts as I came to understand that this friend–this American friend–had never had s’mores. If you’re not from the US or Canada, you might not be familiar. But growing up in the land of the free and never having eaten a s’more is kind of like asking what Mickey Mouse looks like. S’mores are an institution. 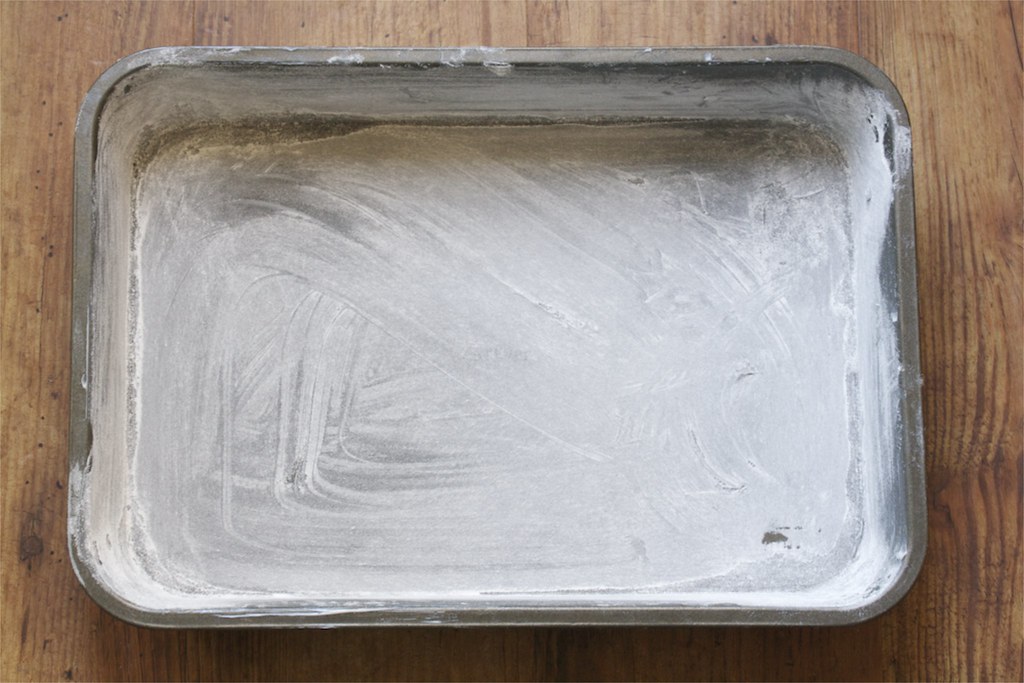 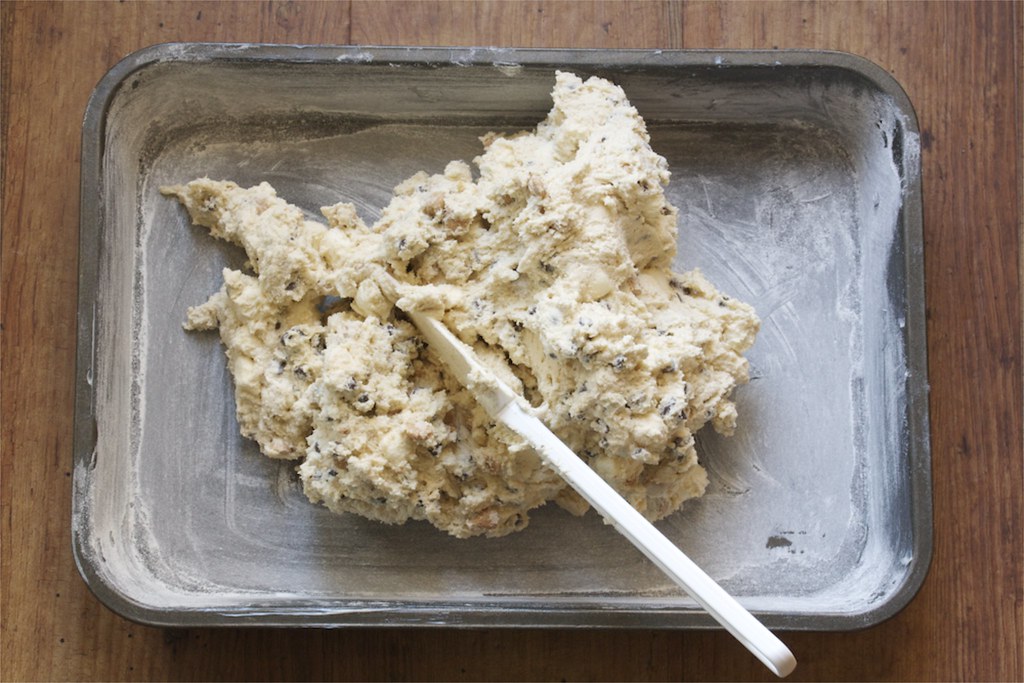 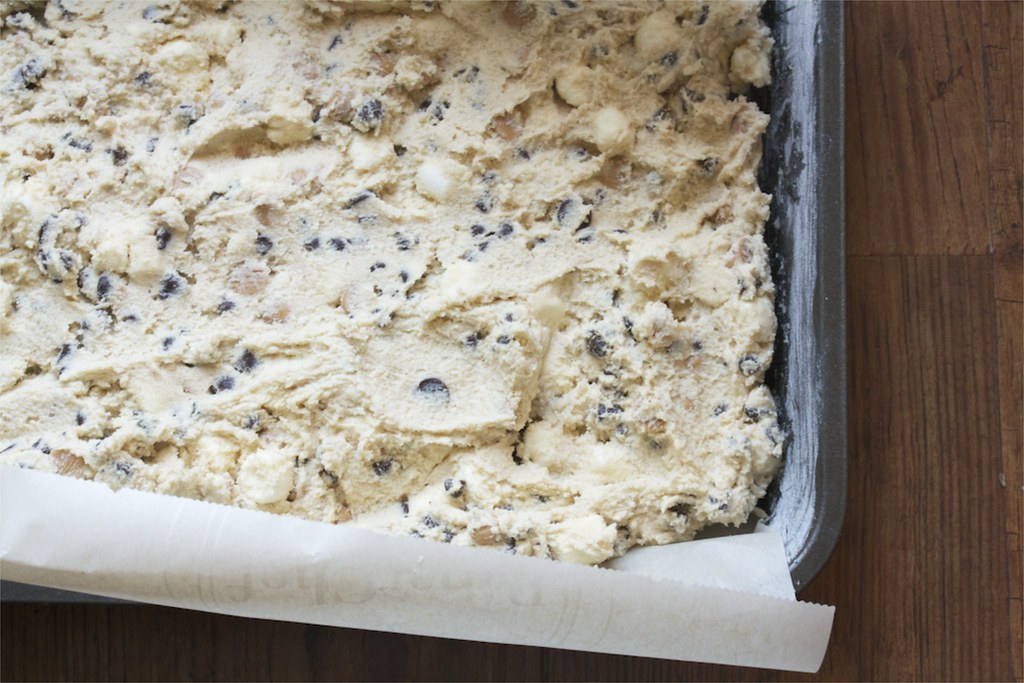 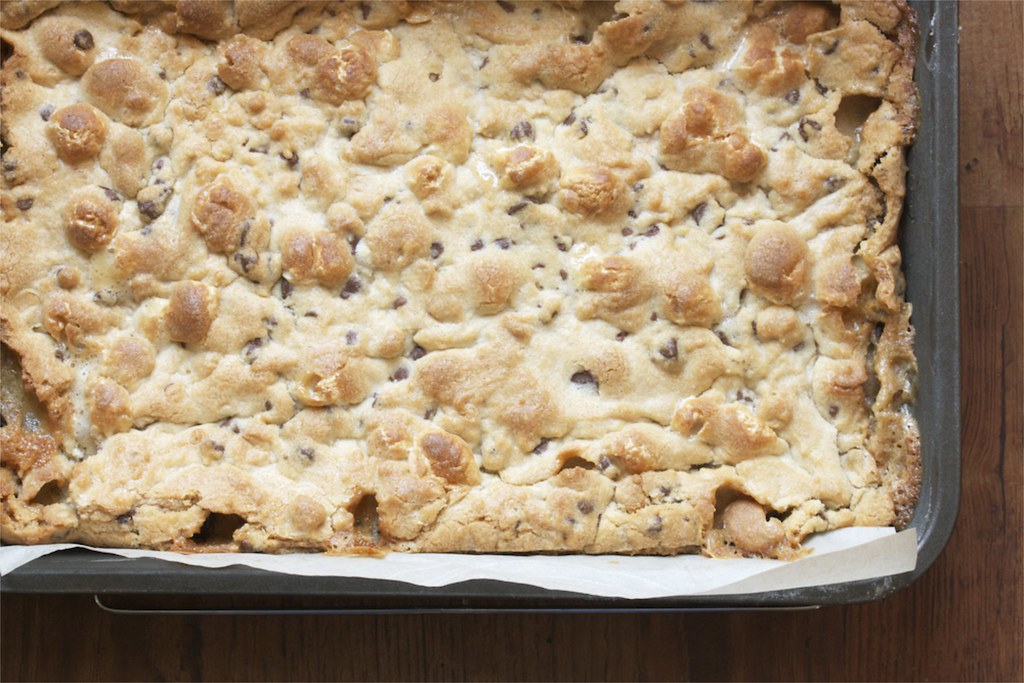 Wikipedia tells me that s’mores were first formally mentioned in a Girl Scouts book in 1927, but that may or may not be the dessert’s origin. Whether the Scouts started them or not, s’mores are definitely part of the camping scene. Here’s the setup: you’re sitting around a fire you made yourself, you and ten of your friends. You’re starting to get worried about the spiders you can’t see in your sleeping bag a few yards away. Your camp counselor pulls out a box of Honey Maid graham crackers, a bag of Jet-Puffed marshmallows, and a pocketful of Hershey’s milk chocolate bars. Naturally, you toast the marshmallows on sticks, then blanket them lovingly in chocolate and graham cracker sandwiches. You spend the rest of the night on a sugar high trying to lick marshmallow off your elbow, giggling, and staring at the stars. 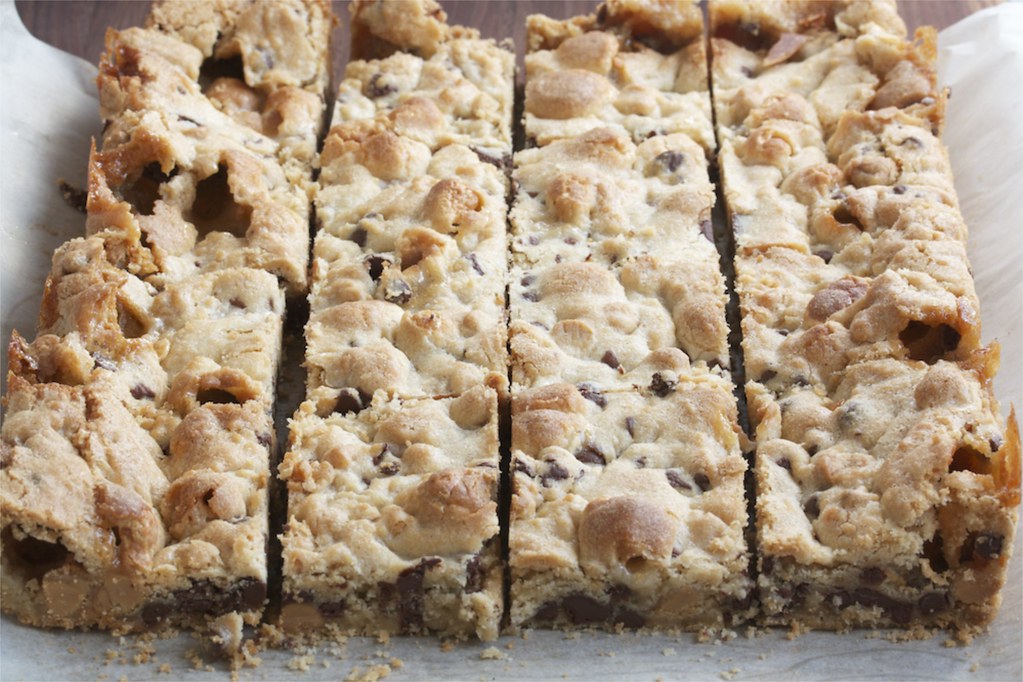 These bars are the stuff I used to dream of as a kid. S’mores in all their splendour with none of the bugs. In my defense, I was super allergic to ants, so the stakes were a little higher when it came to my fear of bugs. You can make these bars in the comfort of your own kitchen, and though they don’t include actual graham crackers, the cookie crackles reminiscently, and no one will be complaining about the addition of peanut butter chips. And! Bonus. Even if you don’t get to toast the marshmallows on sticks and peel off each layer of burnt marshmallow skin, you can have the satisfaction of watching the marshmallows swell up and caramelize into a cratered moon made of sugar. 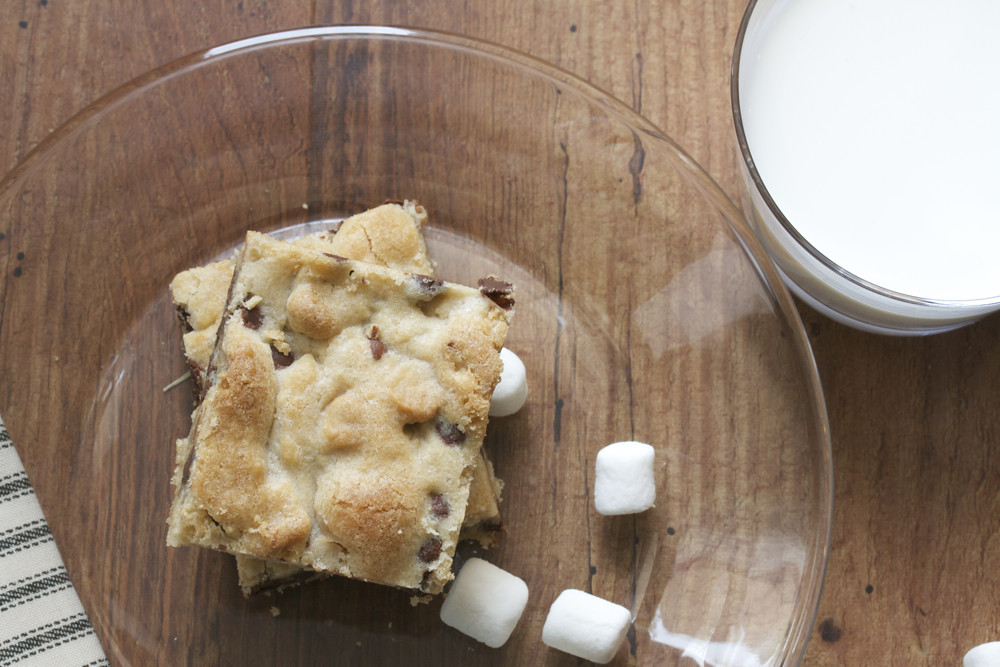 This recipe makes a lot of bars, but don’t worry, you’ll always want…s’more.

You knew that was coming.

2. In the bowl of a mixer, combine sugars and butter and beat on high until fully incorporated, 2-3 minutes. Then add egg and vanilla and beat on high for 6-7 more minutes, until dough changes texture and color, becoming light and fluffy, with a glossy sheen.

4. Pour dough out into prepared pan and spread with a spatula into an even layer. Bake immediately, 20-25 minutes, checking that the edges are browned and caramelized, and all the marshmallows on the top are toasted and beginning to caramelize.

5. Let cool completely, then lift out of the pan with the parchment sling and slice into squares. Serve. Store in an airtight container for up to three days. 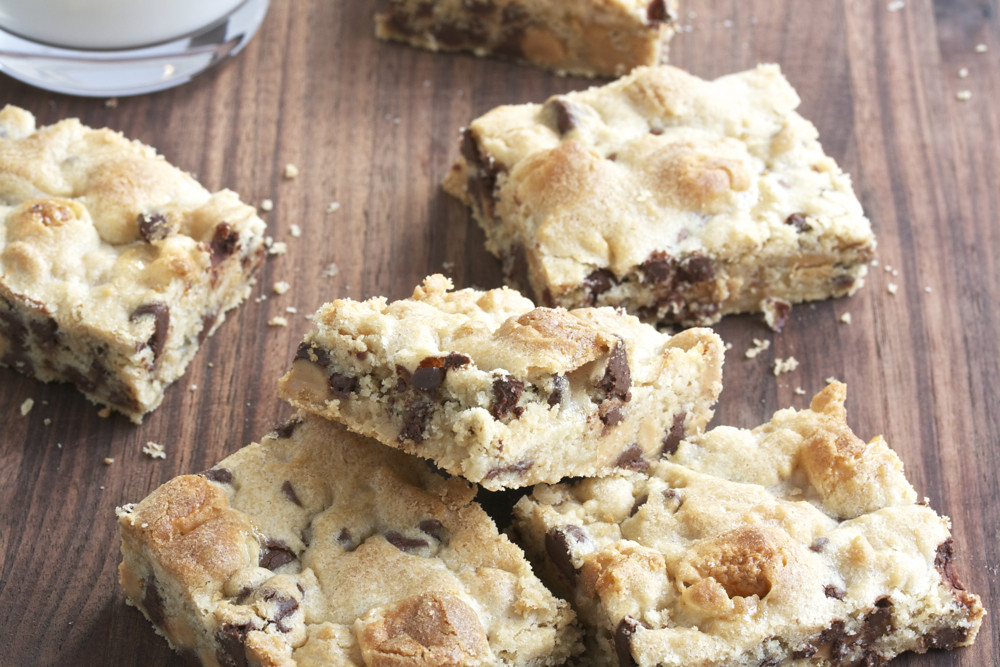