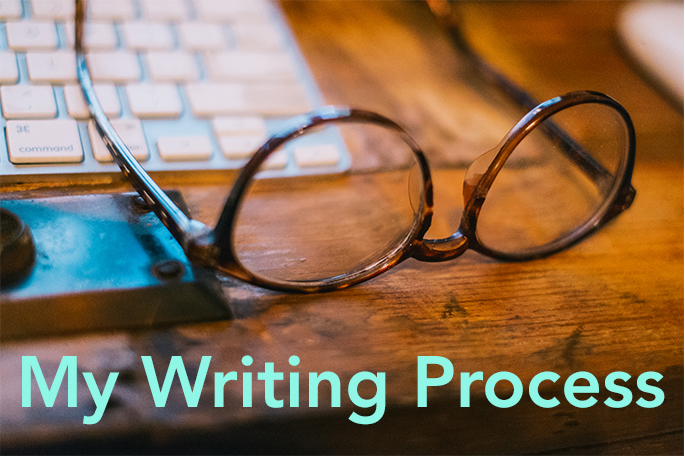 In January I went to a food blog conference in Birmingham. I didn’t know what to expect, and I was kind of going to see how much I wanted to dedicate myself to CrandleCakes.

Like I imagine any “industry” conference can be, there was a lot of really useful information and discussion, some idol worshipping (I took part! Molly Wizenberg of Orangette was there! And I talked to her!!), a little bit of eye rolling after three days of being around people JUST LIKE YOU, and lots of late-night galavanting around and drinking, before a groggy plane ride spent sorting through heaps of cupcake-covered business cards and packaged promotional snacks.

At Food Blog South, we had all of that, plus awesome photography sessions (that I think really changed my photos. I mean look at these photos from right before the conference and these from right after), gulf seafood buffets, and panels galore. But the best part was meeting all the southern food bloggers.

Since Texas isn’t technically The South with a capital “S,” I was a little out of my element, especially among bloggers who specialized in regional food and thought I was completely insane for not liking cajun cuisine all that much. At some point, though, I stumbled across the coolest group of ladies. They all seemed involved in this cookbook publishing scene (so that made them seem extra glamorous to me), and they were HILARIOUS. I kept finding myself gravitating toward their table and following them on the walk back to the hotel during breaks.

So I was excited to get an email from one of those ladies – Nicki of The Project Kitchen – asking me to participate in a Writing Process Blog Tour she was doing. Nicki blogs at The Project Kitchen right now, but had been writing about food for a living for years before David Lebovitz published his first blog post. She has written restaurant reviews for magazines and papers in Nashville, she has edited and written a motherlode of cookbooks. Nicki even lived in Cambridge, England and taught journalism there. Currently, she is working on a cookbook project – Southern Cooking for Company. Fun fact: Nicki has a second career in mammography. Other fun fact: I think I can learn a lot from her writing process, which you can read about here.

The Writing Process Blog Tour is a way to get behind-the-scenes with bloggers, giving us a chance to get out from behind our typical content and talk about the “how” of blogging. Without further adieu:

I write primarily in 3 settings: Crandlecakes, Skillcrush, and ITWOW. At Crandlecakes, I write about food…sort of. I tend to throw in personal details, flitting between humorous anecdotes and heavier accounts of what it’s like to live in Waco, be me, and love food. One week I might write about all the reasons I used to hate hummus while the next I’ll get transparent about women in business.

At Skillcrush, I write about coding and tech. Skillcrush is an online women’s tech education company, and I try to bring down the barrier to entry for women who are just learning how to code. I also edit other contributors’ posts.

ITWOW (In the Words of Womyn) is a writing group I’ve been attending for almost a year. In the group, we write on a prompt (but we don’t have to), we share what we wrote with the group (if we want to), and then we talk about it. The group is all about shared experience, and instead of focusing on criticism or shop talk, we’re about creating space for our voices. At ITWOW, there are no limits. Sometimes I write my blog posts there. Sometimes I write short personal narrative pieces. I’ve even dropped a bit of fiction and an occasional something that might be interpreted as a poem.

2. How does my work differ from others of its genre?

My food blog varies from the norm because I don’t write about food as much as I use a food experience to write about experience and memories. Food is the avenue through which I experience the world, so my blog posts aren’t always “how-to”s as much as they are “this happened”s.

At Skillcrush, my writing is unique because I’m coming from a perspective of someone new to coding and programming. I have enough expertise to be an authority, but I am enough of a rookie to be relatable.

The short(ish) form of the blog post appeals to me. Sometimes 1,000 words is all I have time to write before I’m on to something else (obviously not the case today), like delivering a pizza, baking cakes for a party, or coding a website. And I like the feel of uncovering small slices of truth in everyday things, like kale salad. ^_^

4. How does my writing process work?

I cook lots of food based on whims and inspiration. I might start cooking zucchini muffins because of the overflowing baskets of gourds at the farmers’ market, for example, or I might start baking a towering carrot cake because YUM. I test my recipes several times, then take photos of the food. I usually have around 5 recipes in my arsenal at any given time. Then I look at all my photos and wait for something to trigger a memory. After that, I just start writing. When I have a post ready, I double check that it’s something I’m passionate about and that I want to eat again (quality control, you know). Then I post it and try to convince the world that chocolate pudding is important!

I know I should have an editorial calendar, but I’m still learning here. All in good time.

Time for me to sound the call for the next batch of bloggers to write about writing. I am passing the baton to another food blogger (in keeping with our thread), but then I decided to shake things up a bit and send the tour on to two writers in different genres. Next up:

Shelly of Loving Food and Life

I met Shelly in Birmingham too, and I remember her as the woman with the radish earrings. Turns out they were beets, but they still made her unforgettable to me, which I think was part of her plan with the vegetable jewelry. 😉 After working in the restaurant industry for most of her adult life, Shelly is taking some time to meditate on her relationship with food and her place in the culinary world. Shelly blogs at Loving Food and Life, which I think is aptly named. One thing I really love about Shelly’s blog is the way she pairs her relationship with food with self-discovery. Every time she talks about food, whether it’s a summer squash casserole or a visit to a hip coffee shop, she reflects on the simple, visceral pleasure that food infuses in life. I can’t wait to read about her writing process.

Kat Murry of Ask an Aspergirl

Kat is really cool. I met Kat after hearing her read her work, and (this might sound creepy) I immediately wanted to hang out. She writes what she calls “prose-y poems” that are just bursting with the kind of personal details that manage to resonate with a whole group of people. She blogs at Ask an Aspergirl, where her posts range from hilarious musings on pop culture to reflections on generalized anxiety disorder. She writes the most composed, touching, and yet raw pieces that resist the bounds of genre – I’m so excited to take a peek at her process.

Jenuine Poetess, poet and founder of In the Words of Womyn

Similar to the way I came across Kat, I met Jenuine in a literary setting. After founding ITWOW (In the Words of Womyn) in the San Fernando Valley, Jenuine ended up in Waco the way many of us do, pulled by family. After settling in here, she missed her ITWOW community more than ever, so she started a second weekly chapter here in Central Texas. She didn’t stop there, but continues to create and sustain writing programs almost every weekend and organizes the WordFest portion of the Waco Cultural Arts Fest, all while maintaining a day job! In children’s programs! This woman played a HUGE role in making my first months back in Texas less bumpy, and I know that her passion is in using the written and spoken word to foster communities. Plus she drips golden poetry. Tell us about your writing process, Poetess!

And again, Nicki at The Project Kitchen was before me (here’s her post), and before her was Mel from Corbin in the Dell (another cool lady I met in Birmingham). 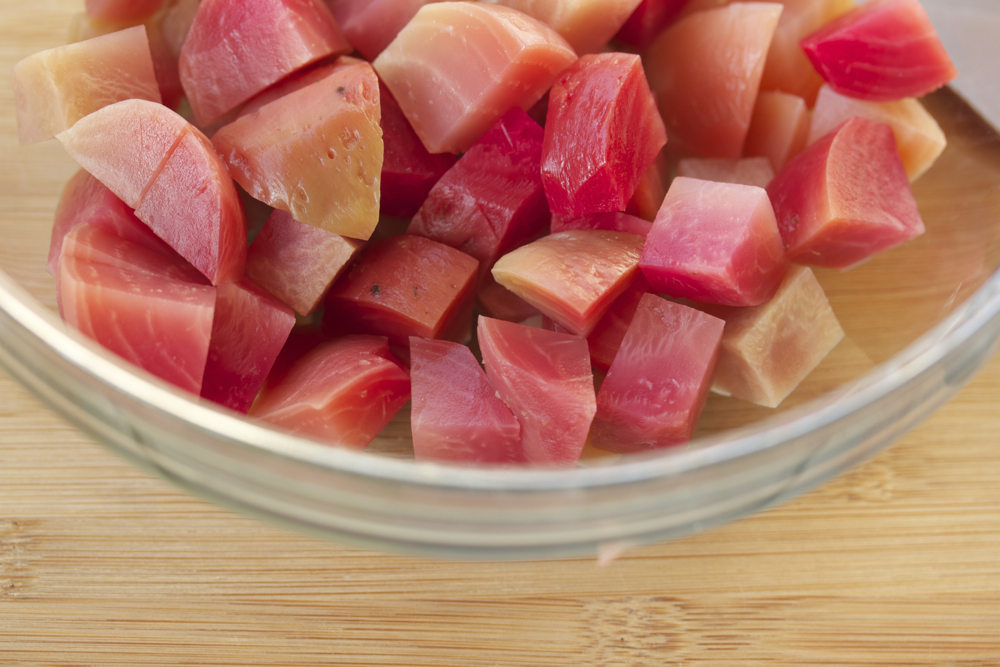 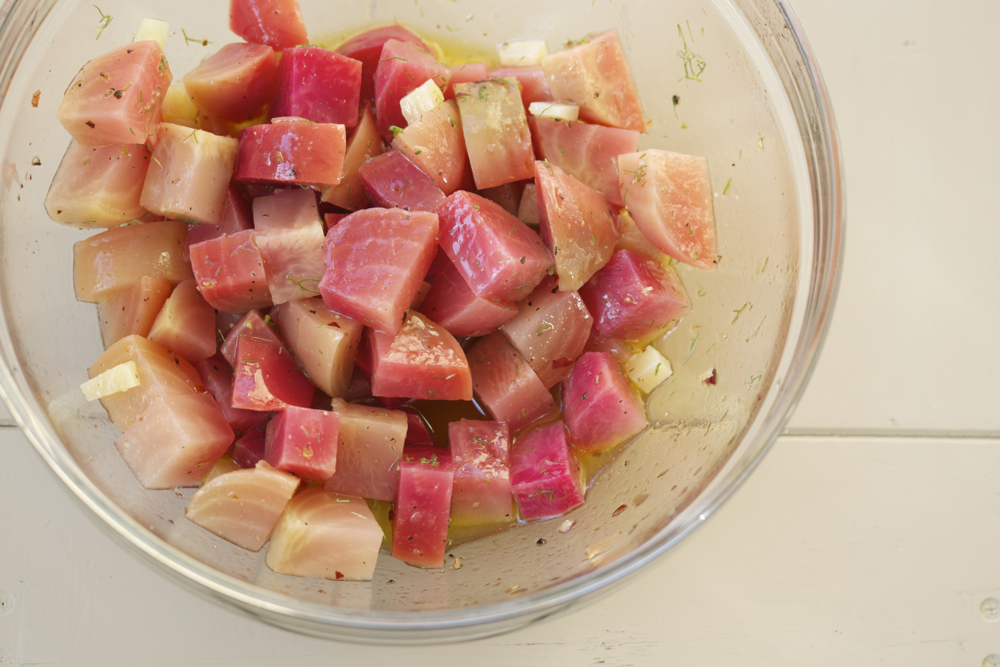 And since you’re here and I hate for you to come here without getting sustenance, here is just a tiny little recipe. Okay the truth is that I didn’t think I could get you here for beets without some other kind of bait (i.e., the Writing Process thing). Beets are good man. Just give em a chance. 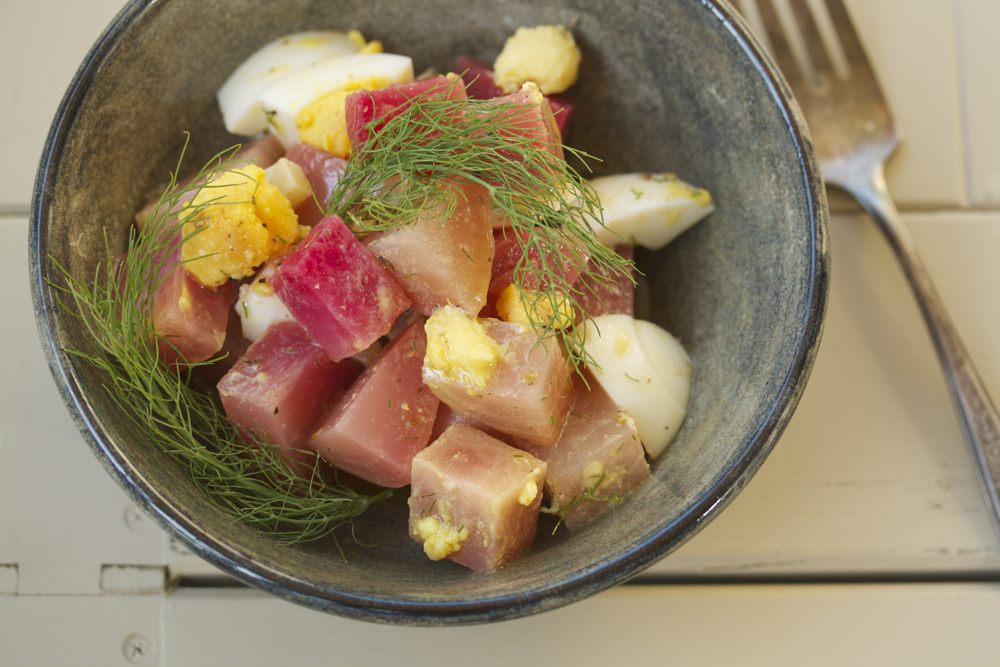 1. Scrub beets clean in cool water, then dry completely and wrap individually in foil. Place in a baking dish with high edges to catch any juices (I use a cake pan), and bake in a 400 F oven for 45 minutes – 1 hour, or until a sharp knife goes through the center of the beets easily. Set aside to cool. Before beets reach room temperature, peel them using your hands and a cloth towel (which will turn pink, so make sure it’s one you don’t care too much about). Slice beets into ½-inch cubes and set aside.

2. Meanwhile, submerge eggs in a pot of water, put a lid on it, and bring to a rapid boil. Boil for 3 minutes, then turn off the heat but leave the lid on. I let the eggs sit for about 10 minutes. Then plunge them into an ice bath before peeling. Chop eggs into small cubes and set aside.

3. In a jar, combine lemon juice, olive oil, oregano, mustard, salt, pepper, and honey. Put the lid on it and shake. In a large bowl, combine beets and dressing.

Serve immediately. Does not keep well (what with the eggs and cheese and all). I would only store it in the fridge for a few hours before serving, if absolutely necessary. 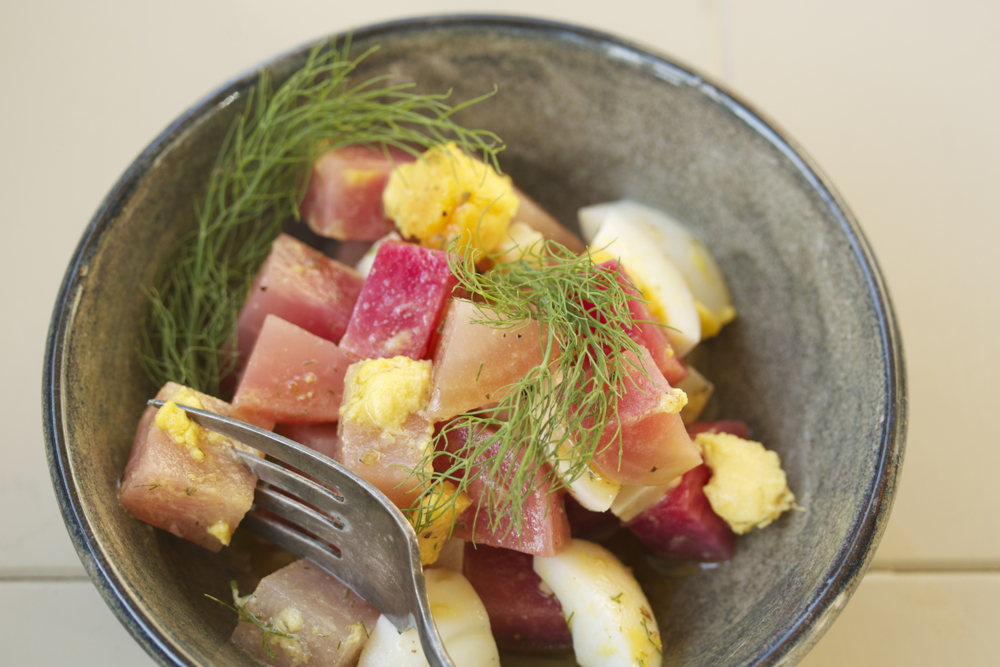 Leave a Reply to » A Word’s Worth :: My Writing Process Blog Tour In the Words of Womyn Cancel reply

← Italian White Bean Hummus
Radishes and Butter: Back from Paris →