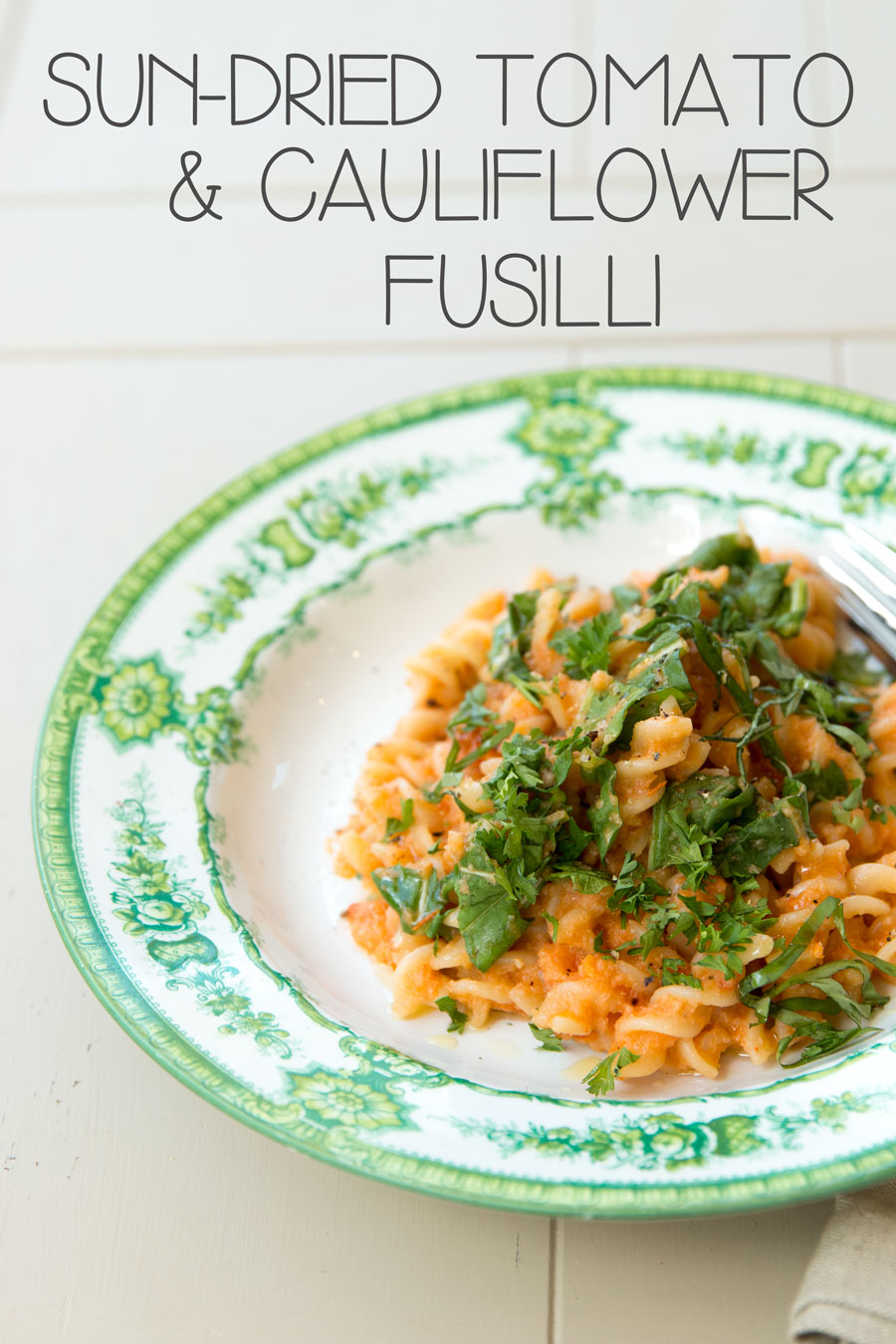 So you know how when someone puts this on Pinterest, “This is the BEST recipe for vegan meatballs,” and your first response is a stifled gag, your second is “Oh gross, soy,” and your third is, “Okay, that might taste okay, but only because people leading a vegan lifestyle have forgotten what meat and cheese taste like.” Know what I’m talking about?

[Oh yeah, if you’re not familiar with what ‘vegan’ means, it’s a lifestyle/diet choice that involves avoiding all animal products, from meat, fish, and dairy, to less obvious things, like honey and Jell-O. People do it for health reasons, political reasons, and any number of other reasons.]

I’ve decided that when it comes to cooking vegan food (which is actually fun – don’t tell all my cakes), sometimes it’s easier to get started if you stop thinking in terms of replacements, at least for a while. Sure, replacements are unavoidable when it comes to vegan baking (LOL more on vegan baking to come), because all the great sweet treats have already been invented. We’re just riffing off the classics. After the dawn of the smoothie bowl and date balls, I’m not sure there are many brand new vegan desserts waiting to be born (although I’m sure Isa from Post Punk Kitchen has a few up her sleeve). We’re left trying to replicate cupcakes and bear claws.

But with savory food, it’s easy to keep things vegan if you just stop thinking about fettuccine alfredo and get really into curry, which is pretty vegan, or devote yourself to epic salads and become a nut milk master. I introduce new things to my dinner table instead of stressing out about updating my classics. If I’m trying to cook a vegan dinner, for example, I tend to make something that doesn’t rely on milk, cheese, or meat in the first place. That way, I don’t have to worry about trying to imitate precisely what I’m avoiding. It’s just not my thing. 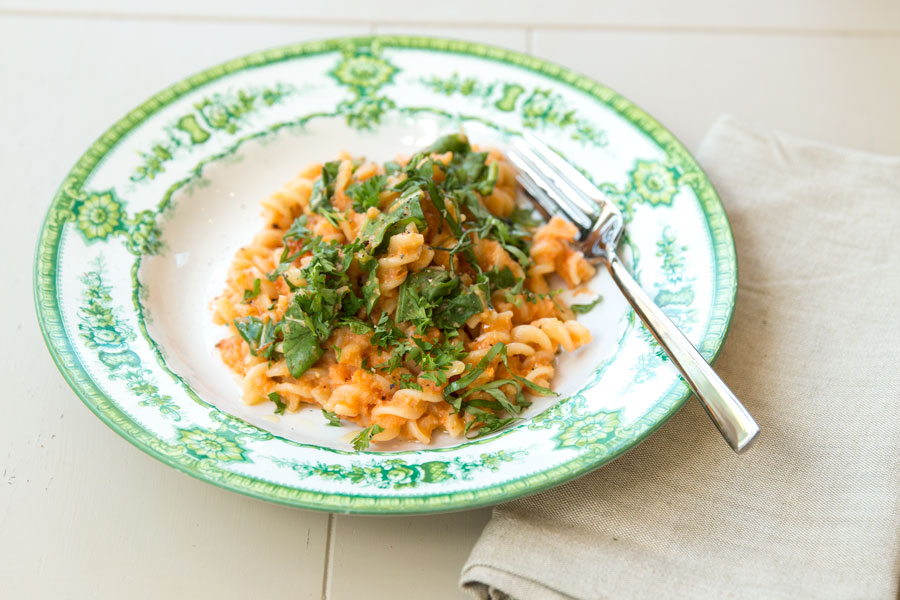 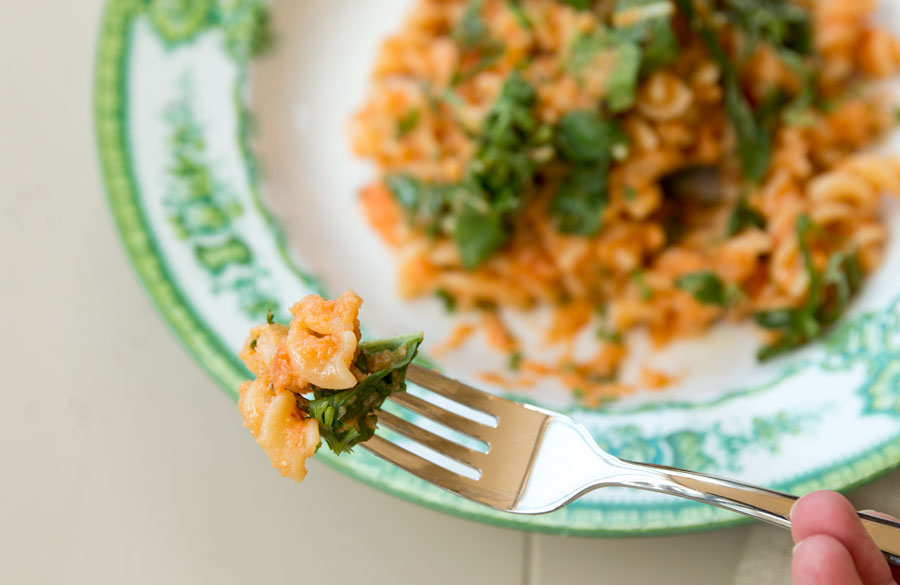 That’s why it’s weird that I hopped on the cauliflower train. In the vegan scene, as I’m learning from Instagram, there are standard substitutions that everyone knows about. Cauliflower is one of them. Vegans, gluten-frees, and paleos have pooled their efforts and wrangled cauliflower into all sorts of guises, from pizza crust to rice (wut? why?) to cream sauce. Not being a major cauliflower lover in the first place, I always saw these cauliflower masquerades as particularly unbearable. I just couldn’t imagine watery old cauliflower replacing gooey, yeasty pizza crust. Not to mention cream sauce!

But a co-worker (hey, Emily!) told me she makes this cauliflower cream sauce, and I just got curious. The idea is to boil cauliflower with water and purée it to make a sauce that looks like cream sauce, even if it doesn’t exactly taste like it. And people kept saying it was good despite its non-creaminess.

Of course I never do anything the standard way, so I added lots of garlic and sun-dried tomatoes to this cauliflower sauce, and guess what? I LOVED IT. The trick was to stop telling myself I was making a cream sauce replacement, and just call it what it is: cauliflower sauce. It’s yummy cauliflower sauce too! It’s saucy and substantial but not heavy, and BONUS it’s actually easier to make than cream sauce, in my opinion. 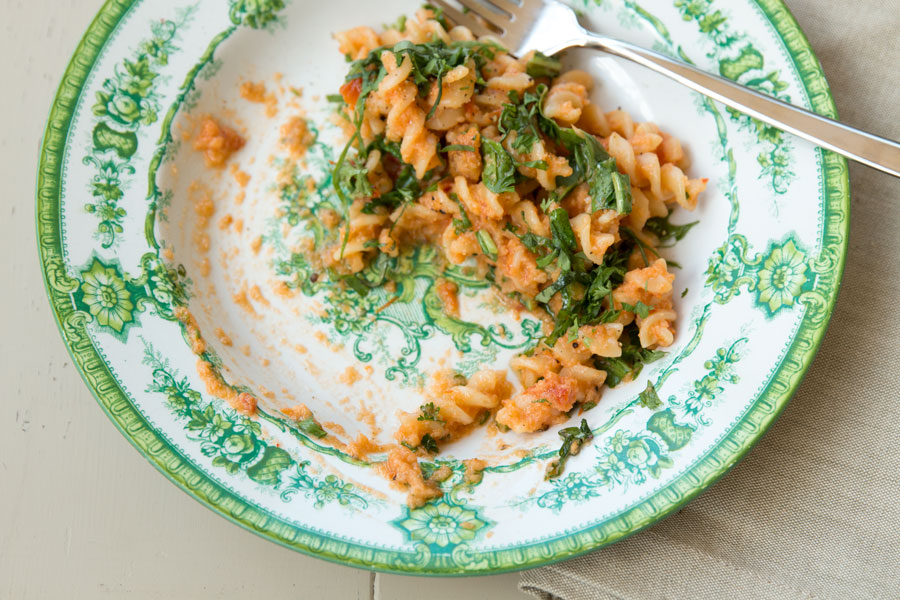 Oh yeah, if this sauce offends you with its veganiness, I’m taking the high road and ignoring you. I can only try to share my food with you; I can’t force you to make it. (<– DID that semicolon make you think I’m smart and taking the high road?? Because I am.)

And vegans out there, please fill me in me on nutritional yeast. The stuff scares the dickens out of me. What IS it? What makes it nutritional? What about it is cheesy?

Sun-Dried Tomato & Cauliflower Fusilli
Serves 2 (double it to serve 4!)
Adapted from all over the Internet, most recently here.

1. In a medium saucepan, heat oil and sautée onion for 3-4 minutes, until translucent. Add garlic and pepper and cook until fragrant, 1 minute. Add cauliflower and sun-dried tomatoes, and cook 3-5 more minutes. Add water and bring to a boil. Put a lid on the pot and keep at a simmer. Cook 10-15 minutes, until cauliflower is soft. (The softer it is, the creamier the final sauce will be.) Remove from heat and let sauce cool slightly in pan.

2. Meanwhile, bring a pot of salted water to a boil and cook fusilli according to package directions. Reserve the pasta water when you strain it.

3. In a food processor, purée the sauce until smooth (taste it to see!) and return to the pan. Keep warm.

4. When pasta is finished, strain and reserve pasta water. In a large bowl, combine fusilli and sauce*, tossing with a few splashes of pasta water if the sauce gets too thick. Add arugula. Taste for salt. Serve two giant bowls of fusilli, adding fresh herbs, cracked black pepper, and a generous drizzle of olive oil.

*Note: This makes a very saucy pasta. Scoop the sauce in a little at a time if you prefer a lower pasta to sauce ratio.